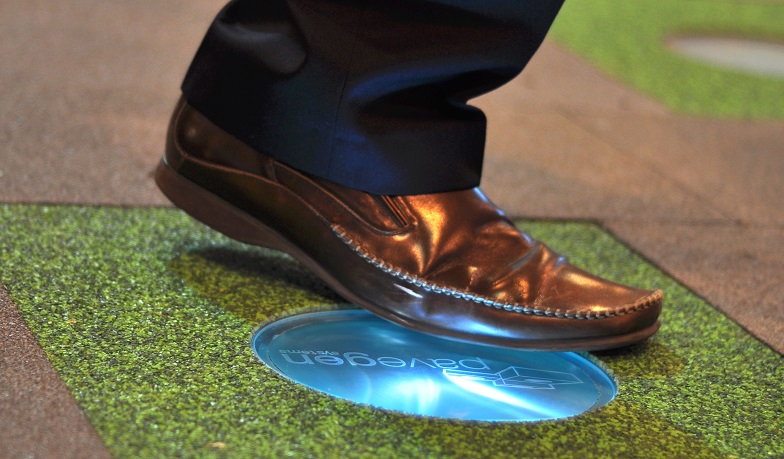 Six years ago, Laurence Kemball-Cook had a brainwave. A graduate of Loughborough university, he was doing a placement year at the energy company Eon, where he was given the job of finding a way to power street lighting with solar energy and wind. It didn’t work, he says, in part because there’s a lot of shade in cities. This got him thinking about other potential sources of power in busy urban spaces. The answer, he realised, was underneath his feet.

“My idea was a floor tile that would convert the kinetic energy from a footstep into electricity,” he says. “Every time someone steps on the tile, they generate seven watts of power. The energy is stored within batteries, and then used to power lighting when it’s needed. It’s an off-grid power source for cities.” We are talking in the headquarters of Pavegen in King’s Cross. He set up the company in 2009 but it took several years to develop the technology and convince people to take it on. His first installation was unorthodox, to say the least. “Investors wouldn’t invest without tiles in the ground, so I broke into a building site on the south bank of the Thames at 2am, installed the product illegally, took photos and put them on our website saying: ‘Celebrating our latest installation.’ I closed a deal with Westfield pretty soon after that.”

Pavegen paving slabs, made from 100% recycled rubber, are designed to generate renewable energy by converting the kinetic energy of footsteps to electric off the grid. Each tile is capable of generating 4-8 watts of electricity per footstep.

The young inventor calls his creation “footfall harvesting”. Essentially, the tile surface flexes about five millimetres when stepped on, which creates kinetic energy that is then converted to produce an average of six watts per footstep. For competition reasons, he’s reluctant to expand on the precise technicalities.

The end result is clear enough though. During the two weeks of the Games, the Pavegen tiles generated 20 kilowatt-hours or 72 million joules of energy. That proved sufficient to keep the walkway streetlamps illuminated at full power through the night, and at half power during the day, with plenty of back-up energy left over to spare.

The tiles featured alongside a 3 megawatt biomass boiler and a roof of solar panels as one of the renewable technologies on show at the Olympics.

“We sought a mix of innovative, cost-effective solutions that would endure beyond the Games”, says Simon Wright, director of venues and infrastructure at the Olympic Delivery Authority. While the 2012 Olympics gave Kemball-Cook the opportunity to prove the large-scale viability of his invention, it’s not the first time his clean tech solution has been put to the test.

The power-generating tiles can also be found in Melbourne’s emblematic Federation Square, where they are generating electricity for part of the indoor lighting on a shopping centre.

The company has now has 30 employees and a second office in Los Angeles. But Kemball-Cook acknowledges there’s still a long way to go. One major obstacle is price – it costs around £1,250 to cover one square metre of ground with Pavegen tiles. “The holy grail for us is to make our product the same cost as normal flooring,” he says.

“It takes a lot of time and investment to get there,” he adds. “Solar took 58 years to get to the point it’s at now. I reckon we’ve done about the first 20 years with our technology. Our investors know it’s not an overnight play. We are establishing a whole industry that never existed before.”

Examples where Pavegen is installed: